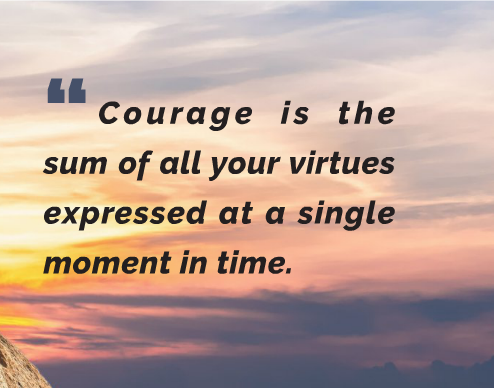 The Bible is filled with stories of immense bravery: Moses leading millions of people into the desert with no water or food; David fighting Goliath; Gideon; Jeremiah; Esther; Abraham. The apostle Paul’s life is one long saga of bravery and suffering. And at the core of courage is humility. Humility was the mark of each of these heroes’ lives. There were some falters, especially with Abraham, but courage marked by humility was the overarching quality that each possessed.

Courage isn’t something conjured up at the moment that it is needed. It is the expression of your character at a moment of testing. Courage is the sum of all your virtues expressed at a single moment in time. The person you have been, your secret thoughts, the skeletons in your closet, and a lifetime of training suddenly spill out. Would you run into a burning building to save a child with a crowd watching? What if no one is looking? What if you are rescuing an old man instead of a child? What if it is your enemy?

Near one of San Diego’s best surfing spots, Solana Beach, a sixty-six-year-old man was training for a triathlon. He was just off Fletcher Cove and in a line with several swimmers when he exploded from the water, both legs in the mouth of a twelve-to-seventeen-foot great white shark. The man emerged long enough to scream that he was being attacked before being dragged under again. Despite the obvious danger, two swimmers in front of the man turned and swam back to him, into the growing cloud of blood where a monstrous shark lurked, and pulled the man through the surf 150 yards to shore. Sadly, he died a few minutes later.

Courage is the expression of someone who sees something more valuable than herself.

Courage defends a victim by standing up to the bully, even though he’s bigger.

Courage witnesses to a stranger. A lack of humility says, “I don’t want to ask that woman if she knows Jesus. I might look stupid.” This is an attitude that values self more than another person’s soul.

“Hang on. That’s not fair! I don’t really know how to share my faith,” you might object. Then care enough to learn. Put down your pride and pick up a book by Greg Stier of Dare 2 Share. He’ll teach you how.

Countless times I have seen my wife walk up to a stranger and say something brief and watched while the woman crumbles in tears. Elliette prays beside her for a long while, and then the woman hugs her tightly. I used to ask Elliette, “What was that all about?” “God just told me to go ask that woman if I could pray with her,” she’d answer. “I hate it when He does that. I’m always terrified that I’ll look stupid.” Yet she obeys and lives are changed.

Courage isn’t a lack of fear. It’s being terrified and obeying anyway. Here we see why humility is the foundation of courage. True courage flows out of concern for others without regard to the risk to oneself.

“The spiritual person, however, can evaluate everything, yet he himself cannot be evaluated by anyone” (1 Corinthians 2:15, HCSB). Many Bible translations use the word judge where the word evaluate is used in this scripture. The English language has two meanings for the word judge: one is “evaluate”; the other is “condemn.” People who don’t follow Christ love to quote Jesus saying that we are not to judge (Matthew 7:1, HCSB). Jesus means not to condemn. He isn’t telling a godly person not to evaluate or discern.

How do we evaluate or judge true courage? Courage is an outward expression, but its true motivation is inward, and we can’t observe that. As an example, let’s take two platoon commanders in the same battle. Both charge a machine-gun nest, brave the bullets, and save their men. Each gets a medal for his actions.

The first man saw that the guns would soon mow down his men. He was drafted into the war; he didn’t volunteer. He comes from a broken home with no father to teach him honor in battle. Terrified and without thinking, he charges to save his men’s lives. He captures the guns, and his men live.

The second man is also terrified. He comes from a decorated military family. He joined the military because that’s what all the men in his family do. He looks around for escape and sees none. He doesn’t care about his men but is terrified to be branded as a coward. He’d never be able to look members of his family in the eye again. Seeing no way out of his predicament, he charges and his men are saved.

Are these men the same? We don’t see their hearts; we see their actions. They each earned the military reward that is given by mere men, but God knows who they are on the inside, why they did what they did. “I, Yahweh, examine the mind, I test the heart to give to each according to his way, according to what his actions deserve” (Jeremiah 17:10, HCSB).

One man says grace in a restaurant with meekness and humility out of pure gratitude to God, who gave him the meal. Another says grace to impress the people around him with how religious he is. He smacks of religious pride. Both have completed the same action, but one said grace in humility and the other in pride.

So how do we properly judge courage? We judge it only in ourselves. We can judge—evaluate—others only by their actions, because we can’t truly know their motivations. And this is where the man of God must dwell—at a point of constant self-examination:

Why did I say that? Why did I react that way?

Guard your heart and your integrity. Courage, or lack of it, is a window that reveals your level of humility, which makes it a primary signpost on your walk with Christ . . . and on your journey to becoming one of God’s servant kings.

Excerpted from RISE OF THE SERVANT KINGS: WHAT THE BIBLE SAYS ABOUT BEING A MAN. Copyright © 2019 by Ken Harrison. Published by Multnomah, an imprint of Penguin Random House LLC.

Rise of the Servant Kings: What the Bible Says About Being a Man is available now on pre-order through Amazon, Barnes & Noble, Christianbook, Powell’s, BAM!, Hudson Booksellers, IndieBound, Walmart, and Mardel. The book launches May 7th and will be available everywhere books are sold.

Ken Harrison is the president and chairman of Promise Keepers. Ken’s mission is to provide executive leadership and strategic direction to the ministry while inspiring men to be bold, humble and ambitious about their faith.

Harrison also serves as CEO of WaterStone, a Christian Community Foundation that oversees donations of millions of dollars per month to build God’s Kingdom. He started his career as an LAPD street cop in the notorious Watts/Compton area. There, he received numerous commendations.

Harrison is a Colson Fellow and has served on numerous local and national boards, including FCA, Colorado Uplift, Urban Youth Ministries, Corban University and WaterStone.

An author and corporate speaker, Harrison has appeared on many radio interviews as well as “The 700 Club” and “Turning Point” television shows. With a long record of dedicated service to ministry, Harrison leads Bible studies locally and participated in missions trips to Mexico, South Africa, Haiti, and the Philippines.

He has been married to his wife, Elliette, for 28 years and they have three children.

This article appeared in the April 2019 online issue of Solutions Magazine.